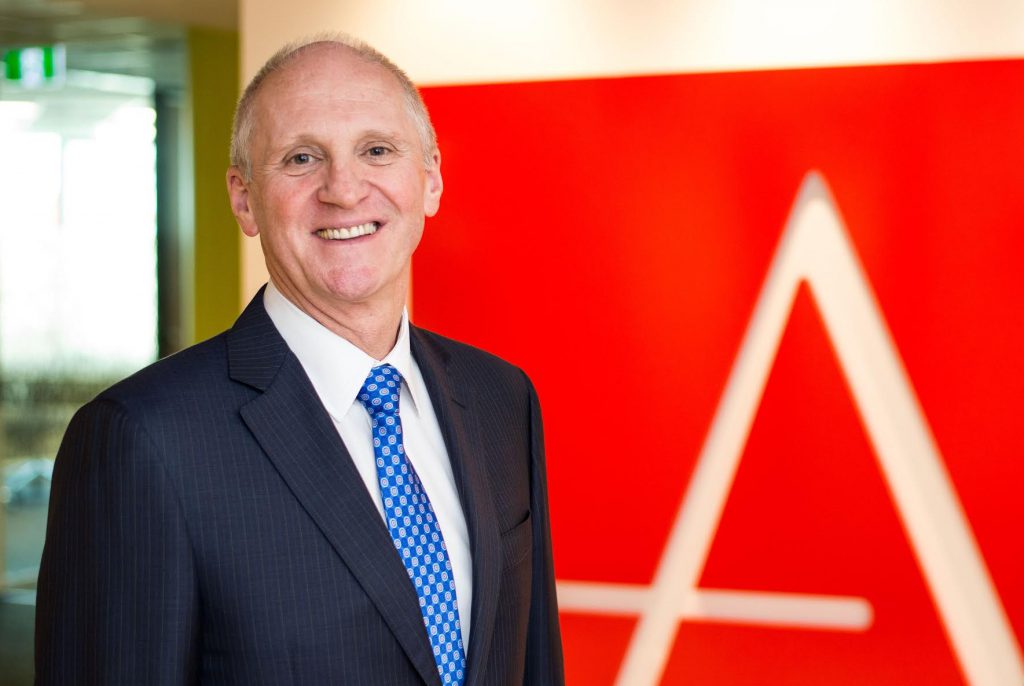 Auscript Australasia CEO Peter Wyatt has been announced as a Northern Region (QLD) Nominee for the 2015 Australian Ernst & Young Entrepreneur of the Year Awards, after revealing to judges he’s a “serial entrepreneur” who is committed to providing cost-effective and secure access to justice globally through innovative technologies.

Mr Wyatt put retirement on hold in 2004 to rescue Auscript, at the time a struggling court reporting company, out of voluntary administration – saving more than 350 Australian jobs in the process.

In just over 10 years, Mr Wyatt has transformed Auscript into the leading court recording and transcription firm, with a huge technology focus and the largest share of the Australian market and over 400 team members across Australia.

He said buying Auscript out of administration was a risky decision to make, and to make matters worse, the company lost a third of its remaining contracts within weeks of taking the reins, putting it in an even more dire position.

“The thought of just walking away briefly crossed my mind, but I’d committed myself to Auscript, to its employees and to developing technology to deliver transcripts in a digital world, so I decided to roll up my sleeves and inject more capital into the struggling Company,” Mr Wyatt said.

“My business partner and I could see Auscript’s incredible analogue pedigree and digital potential and we were confident we could achieve something extraordinary if we focused on changing the slow analogue court market through innovative digital technology.

“As a result of stringent funding models, courts are traditionally unresponsive to the potential costs of innovation, but I was determined to show the market there was a better, faster and ultimately cheaper way to produce an accurate record of proceedings.”

Mr Wyatt and his team completely re-engineered the recording and transcript production process, developing a transparent, quality focused workflow system and eliminating the need for tape-recording machines or to have stenographers sit in courtrooms all day.

With no off-the-shelf software available to enable Auscript to achieve its mission, Mr Wyatt invested in an in-house development team to build a solution which allowed court audio to be securely streamed to remote locations while it was still recording in a courtroom. Auscript then built a workforce of skilled Audio Transcribers who could work from anywhere at any time.

To further support the global court market, Mr Wyatt purchased software development firm For The Record (FTR) in 2013. While Auscript is the only transcription provider in Australia with access to the full suite of FTR’s advanced technology, FTR exports its Queensland-made solutions globally.  FTR commands an estimated 60 per cent of the worldwide digitised court market, spanning 65 countries and over 27,000 venues.

“Court recordings and transcripts are essential for the effective functioning of the world’s judicial systems, yet the system was previously being supported by an archaic and slow analogue service industry,” he said.

“We’ve invested more than $12 million since 2004 into developing tools for our clients which promote greater transparency in the judicial system, ensuring the ‘verbatim record’ is always captured, delivering high quality services to the judiciary, parties and the public, all while achieving significant cost savings for our Government clients.

“I’m always asking myself, ‘where are the holes in the existing system?’ so that I can uncover opportunities for improvement. Being a successful entrepreneur is about finding the secret.”

It was this search for the secret which led Mr Wyatt to spearhead the creation of a product called Court.fm, which earned Auscript and For The Record a spot on BRW’s Most Innovative Companies list in 2014.

Court.fm gives judges and legal professionals around the world almost instant access to recordings of trials and hearings from anywhere, at any time.

Mr Wyatt said that you no longer had to actually sit in the courtroom to hear proceedings as Court.fm enabled accredited users to listen to high quality court recordings on their mobile device within minutes of the spoken word.

“We’re working hard to promote transparency in the court system by introducing innovations which essentially will provide any user, anywhere in the world, with greater access to justice through speed and accuracy of the official record.”

“I’m incredibly proud of the fact that we are exporting Queensland-made technology all around the globe.”

In January this year Mr Wyatt signed a landmark deal with US-based public sector software developers Tyler Technologies, who purchased a 20 per cent share in the companies, bringing the combined value of Auscript and For The Record to AU$100 million.

Peter Wyatt will vie for regional honours at the Northern Region award ceremony on 30 July at Brisbane City Hall, with regional category winners going on to compete at the national awards ceremony in Sydney in October. The overall Australian winner will then continue on in the global program, travelling to Monte Carlo in June 2016 to compete against other national winners from more than 60 countries for the chance to be crowned the EY World Entrepreneur Of The Year™.

Editor’s note:
About the EY Entrepreneur Of The Year™ awards

EY Entrepreneur Of The Year™ is the world’s most prestigious business award for entrepreneurs. The program makes a difference through the way it encourages entrepreneurial activity among those with potential, and recognises the contribution of people who inspire others with their vision, leadership and achievement. As the first and only truly global award of its kind, Entrepreneur Of The Year celebrates those who are building and leading successful, growing and dynamic businesses, recognising them through regional, national and global awards programs in more than 145 cities in over 60 countries.

Qualifying as a Chartered Accountant in 1979 Peter Wyatt knew accounting was a stepping stone to life as an entrepreneur. The now 61-year-old started his first business at 25, but didn’t consider himself a true entrepreneur until 2003 upon selling his share of the leading Australian and New Zealand claims management firm he’d established 24 years earlier – formerly Wyatt Gallagher Bassett. Never shying away from a challenge, in 2004 Peter came out of retirement to purchase court transcription firm Auscript out of administration. Today, Brisbane-based Record Holdings, in which Peter is the majority proprietor, is the 100 per cent owner of Auscript and For The Record (FTR).

About For The Record

FTR is a global leader, dedicated to providing digital recording, review and content management solutions for justice, law enforcement, legislative and public meeting bodies. FTR’s recording solutions have been the standard in digital evidence recording around the world for more than 20 years. With North American headquarters in Denver, CO, and global headquarters in Brisbane, Australia, FTR is able to develop and market its solutions in over 65 countries and can be found in over 27,000 venues worldwide. FTR is a wholly owned subsidiary of the Australia-based Record Holdings Pty Limited.